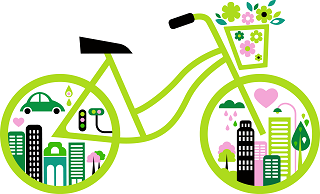 Martin Garrett, Chair of Transport for Greater Bristol Alliance (TFGB) and a member of Friends of Bristol Suburban Railways (FOSBR) gave a wide ranging fact, filled talk. What follows includes some of the main points and issues he raised.

Early in his talk he warned that even from his own relatively well informed position, because of the complexities of all the ‘tech stuff’, the number and political machinations of organisations with interests in transport issues, and the problems of coordination and communication between them, any account of the transport in our area is to some degree going to suffer from lack of ‘coherence’.

Martin explained the role of TFGB in trying to monitor and create an overview of Bristol’s ‘transport predicament’ and in maintaining, not always successfully, an alliance between all groups and organisations interested and involved in Bristol’s transport. This is not an easy task when these disparate and specialist groups tend to want ‘to go their own way’. For TFGB, transport integration and connectivity are a major focus of its work and it responds to consultations and offers solutions to transport problems.

Martin spoke somewhat disparagingly of the West of England Combined Authority (WECA) whose remit while including transport, also includes coordinating other major regional projects like strategic spatial planning and housing, and ensuring that from their £30 million annual budget, local councils get funding for these developments. However, although WECA is nominally responsible for transport across the region, Martin sees a reluctance on its part to take on the complexities of developing and coordinating local rail services (Metro West) across councils whose political make up varies considerably and in some cases is at variance with that of WECA’s Metro Mayor and his deputy, both of whom are Conservatives. Thus it has put no pressure on Network Rail, so that there has been no real improvement on the Severn Beach line timetable this year, no upgrades of local stations, and little or no progress on a proposed Horfield station because WECA has offered no funding for the project. While WECA has produced a Joint Local Transport Plan (JLTP), it relies on local councils for its implementation.

Further government funding and the necessary legislation will be required if WECA is to additionally become a Rail Authority and if it is to be prevented from pouring money into road widening and construction of new ones.

BCC in the short term is getting more bus lanes created and has got First Bus to double the frequency on routes 1,2,75 and 76 and introduce more than 100 biogas buses. Bus hubs and more orbital linking routes to them are being considered as are trams for the A36 Gloucester Road and out to the airport. In the medium term a Workplace Parking Levy has been suggested to help finance transport developments. The current Bristol mayor also has alternative plans for a Metro with some underground running.

Martin concluded with suggestions for what we can do as individual citizens. Here are some of them:

Alan Morris - Member of Bristol Civic Society and Chair of Bristol Walking Alliance outlined BWA’s priority aims and how these have to engage with the complexities of local transport policies and plans.

BWA campaigns for improvements in our environment for walking, encouraging and arguing for a developing trend to a shift to public transport, active travel and clean vehicles.
It sees as urgent:
• the need for more road space to be allocated to buses
• tougher parking policies including more Park and Ride schemes, parking charges, further roll out of Residents’ Parking Zones
• Improvements in cycling schemes. In their present form, segregated cycle lanes are uncommon and are thus often unattractive to non-cyclists
• Development of walking schemes
• Liveable Neighbourhoods – a policy which works well in Waltham Forest in London but not one yet taken up by BCC

BCC, West of England Combined Authority (WECA), Government and citizens all have a role to play in improving local transport. WECA however has very few staff working on transport (see Martin Garrett’s comments elsewhere in this report).

The complications, not to say convolutions, of formulating an overarching Bristol Transport Policy can be realized when it is understood that it is based on and informed by:
• The Bristol Transport Strategy (which is not a Plan!)
• The Joint Local Transport Plan (in the context of The Joint Special Plan)
• Bristol City Centre Framework
• Temple Quarter Masterplan
• Clean Air Plan
• One City Plan

• The organization pushes for improved infrastructure for cycling, specifically the space cyclists need on our roads
• Encourages cyclists to report drivers whose cars come too close to them and tries to get police to enforce the law in such cases
• There is the potential for many more people to cycle to school, work etc.
• Bristol could learn from Seville that has developed a very good bike lane structure in a relatively short time:
https://www.uci.org/news/2019/seville's-ambitious-bike-network-plan-a-success-and-growing
• Individuals can help by putting pressure on MPs and local councilors

Tony Boden from Bristol Living Streets which works closely with Bristol Walking Alliance said:
• Anyone can improve their local walking environment by considering its ‘walkability’. Bad siting of ‘A’ Boards, bins, areas of loose paving etc can all be reported directly to the Council via an app.

Paul Bullivant of the Bishopston and St Andrews Parking Group (BOSA) said it was pushing for a city wide parking strategy rather than the piecemeal approach that presently applies.