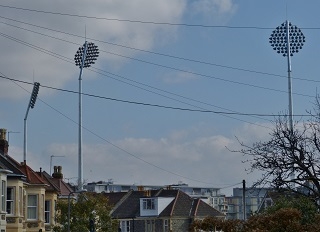 On Wednesday 20th April well over 100 local residents attended a meeting with Will Brown, Chief Executive of Gloucestershire County Cricket Club (GCCC), to talk about the new floodlights and other issues relating to the Club.
The meeting was facilitated by Cllr Tim Malnick and attended by Cllr Daniella Radice and representatives from HowZat? Residents’ Group. The process was resident-led, with Will Brown, Councillors and HowZat? responding to questions and comments.

There was enormous concern about the scale and appearance of the lights, the effect on the skyline, the process by which they had been approved, the light spill and glare when they are on, which was felt to be more intrusive than anticipated and glare from sun hitting the masts during the daytime.
A few people expressed the view that the daytime appearance of the lights was better than they had expected and one or two felt there was no problem with the light spill either.

Testing overseen by a Council Environmental Health Officer has found that the light spill from the floodlights is compliant with the levels submitted in the Planning Application. However, these levels are many times greater than those recommended for light spill in the England and Wales Cricket Board guidance and that from the Institute of Professional Lighting Engineers.

The Club has permission to use the lights for up to 15 competitive matches per year.  This season they have plans for up to 12 matches and 2 (reduced from 3) practice sessions. HowZat? are objecting to the use for practice sessions which is not currently covered by the Floodlight Use Management Plan, negotiated with local residents.

Other Issues
Residents expressed concern about traffic and parking on match days, late night noise from floodlit matches and potential anti-social behaviour when crowds leave the Ground. Will Brown outlined measures that the Club will be taking to mitigate some of these issues.

There were also concerns about the safety of children using the “walking bus” route through the Ground to Brunel Field School, and from vehicles exiting the Grace Gates onto Nevil Road without due care.

Hopes were expressed that relationships between the Club and local residents could be improved by more regular contact.

The Bishopston Society
This is good news. Trees will be planted from next December.

The Bishopston Society
Interesting to look back at this post from 2016 and see that some progress has been made.

The Bishopston Society
First bus will shortly be launching a consultation on February 17th on changes which may threaten the number 9 route in September along with some alterations to the 72 bus. If you are concerned then please do take a look at on the First Bus website. It will be found then via a link here https://www.firstgroup.com/bristol-bath-and-west/news-and-service-updates/customer-consultations

The Bishopston Society
Said to cut greenhouse gas emissions by 85 per cent, the bio-methane powered gas vehicles are fuelled by food waste and are a key element of the city’s drive to combat air pollution and become carbon neutral by 2030.

The Bishopston Society
Local councillors vote against growth of Bristol Airport from 10 to 12 million passengers.