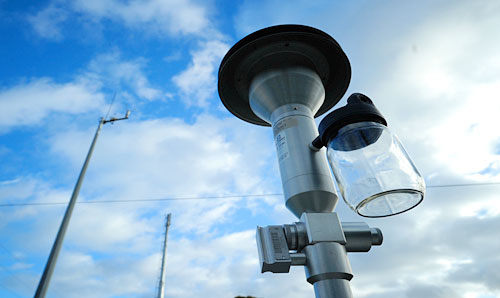 Gavin Spittlehouse develops the detail on pollution locally with a story about back garden gadget-based measurements, and gives his views on how we can respond.

A great deal of interest was expressed in local air pollution issues at the Bishopston Society AGM in October 2016. In this article I’ll draw attention to local and national factors relating to air pollution affecting human health and to put these in a Bishopston context.

Air quality was in the national news through 2016, with the vehicle emissions scandal, growing evidence of the associated health issues, low emission zones, legal challenges to government policy (or lack thereof) and Bristol's Metrobus.

When we elected Marvin Rees as mayor last May, his manifesto included a pledge to “pilot a low emissions zone in Bristol city centre”. This has yet to happen and I understand that Marvin doesn’t have the legal power to do so at present. However meetings have been held with the government with a view to progressing this.

Much of our air pollution in Bishopston comes from vehicle traffic. Bristol's Air Quality Management Area covers central Bristol up to The Arches and includes a long narrow corridor from The Arches up Gloucester Road as far as Monks Park Avenue. Air pollution is monitored in two ways:-

There are other local sources of air pollution, including garden bonfires; industry; household fireplaces (especially any burning coal or poor quality wood or using open fires or woodburners that don't comply with Bristol's city-wide smoke control zone); and central heating fumes. These are things that individuals can influence and they will be significant in some locations, but it's generally accepted that by far the most important local source of pollution is vehicle exhausts. 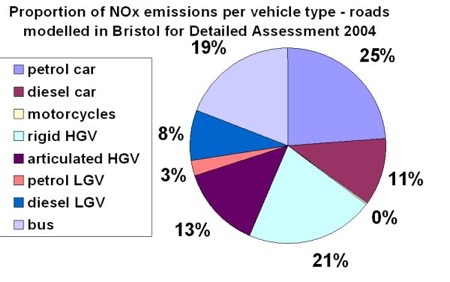 (image from www.bristol.airqualitydata.com, which is an excellent place to start for both background information and local air pollution data.)

The annual NO2 measurements at Bristol North Swimming Baths are as follows:-

World Health Organisation recommended limits are 40 μg/m3, which Bishopston exceeds by over 20%. The EU limit is also 40 μg/m3.

These annual measurements don't tell the whole story. Pollution levels vary significantly with factors such as proximity to the source (for example vehicle emissions are far higher at the roadside), time of day (air pollution tends to build up during the day when there is most traffic and then gradually clear overnight), time of year and weather (pollution will disburse more quickly on windy days).

I recently measured the NO2 levels in my back garden in Bishopston over a two week period, using a diffusion tube provided and analysed by Friends of the Earth. The result was 21.6 µg/m3, significantly less than the latest annual average of 51.6 µg/m3 (about 90 metres away). Unfortunately I don’t have measurements at Bristol North Swimming Baths for the same period so I can’t make a direct comparison. The air inside my house isn’t likely to be any cleaner than the air outside my back door, so this should be a reasonable measure of what I was breathing at home in November.

Various electronic gadgets are available to measure air pollutants, I’ve tried the Air Quality Egg and the CleanSpace Tag. These are interesting as they give you an idea of how air quality varies over a day or a week, but they are uncalibrated so they can’t give you a reliable measurement. You can learn much of what they tell you by looking online for air monitoring data, but gadgets can be a great way to stimulate interest.

Nitrogen dioxide is just one of the harmful pollutants present in our air; sulphur dioxide, ozone and particulate matter are also present and are very significant in human health. The latter is often referred to as “PM10” - particles in the air with a diameter of less than 10μm (around a fifth of the diameter of a human hair). These are various toxic chemicals from many sources, especially emissions from diesel engines and other sources of smoke. Their size means that they can penetrate deep into the lungs. In 2014 Bristol was the twelfth worst place in the UK for PM10 levels. PM2.5 and smaller are considered even more toxic.

These pollutants are strongly associated with various respiratory diseases from asthma to lung cancer to heart disease. Children are particularly at risk, so we should be concerned about schools close to busy roads. A link between traffic pollution and dementia has also been suggested by recent research.

When is air pollution worst?

Generally speaking it’s when local traffic is busiest - weekday rush-hours. Air pollution builds up during the day and reduced overnight. Levels are also affected by weather conditions, particularly wind speeds. Peak pollution levels are far higher than these annual average levels, but are not measured in Bishopston.

Where is it worst?

Generally speaking it’s worst in high traffic areas. Levels can vary over a short distance, for example they might be far worse at the side of a busy road then a 20 meters up a side-street.

Generally yes but as the figures above show, not everywhere. Vehicle engine technology is getting better (and vehicles are getting more efficient so burning less fuel). EU regulations have played a big part in pushing car manufacturers to reduce emissions, although the recent VW "defeat device" scandal raises many questions. However some areas will be getting worse as traffic levels increase, and where pollution is decreasing this is generally not happening fast enough.

What can we do about it?

Individually: our lifestyle choices have an impact, especially what we vehicle drive, how much, when and how.
Collectively, we can demand action from our local and national politicians and we can influence polluters via our purchasing and investment choices. We can support national campaigns for awareness and action, such as ClientEarth who recently won a High Court challenge to force action from the government. London has a vocal campaign organisation - Bristol has many organisations and individuals (both inside and outside of local politics) pushing for cleaner air but not as yet a single focused campaign group.

Gavin Spittlehouse is a lead member of Sustainable Bishopston - http://sustainablebishopston.org.uk/.

The above is the second in a series of three related articles focused on air quality. The others are:-

3. Clean air in Bristol - how we and the Council can respond, by Tom Brook