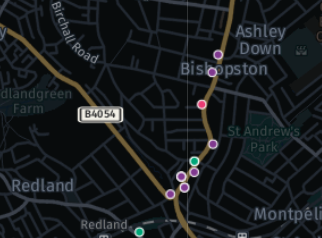 A probe into offshore ownership in Bristol shows that properties owned by secretive tax havens are to be found anywhere, including Bishopston, not just in plush mansion areas.

"Secret tax dodgers buying up Bristol" is how this has been billed by The Bristol Cable, the group who carried out the investigation, following recent leaks of data at national and international levels, such as the Parama Papers and the Paradise Papers.

A recent Cable meeting claimed that "swathes of Gloucester Road" have been identified as being owned offshore, as can be seen on the interactive online map produced by the investigators (shown in part above, with thanks to Bristol Cable).

Their team was at pains to point out that offshore ownership is not necessarily illegal, and urged caution in jumping to conclusions about particular leaseholders, tenants or retailers involved in properties identified in this way: the individuals or companies involved may well be entirely innocent, and are often totally unaware themselves of the ultimate ownership of their premises.

Nevertheless, one result of "the dark side of offshore property ownership" is that "illicit money and corrupt officials from overseas could be stashing cash" in properties on our doorstep, and it’s near impossible to find out", they said. Tax avoidance is another.

The Cable is therefore inviting citizens to continue this investigation themselves, has published handy tips on how to find out about ownership of individual properties, and is inviting updates.

On their web site you can not only view the properties involved on the interactive map, but also download a spreadsheet providing further details of each place already investigated:-