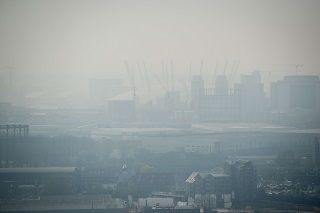 Bristol and Air quality news. No vehicle idling zones: at a recent Full Council meeting, a LibDem motion was passed to implement zones where switching off idling engines is enforced to reduce air pollution.

The motion called for: “By spring 2020 investigate, and implement if financially feasible, the introduction of an enforceable “anti-vehicle idling” zone outside every school and in every park in the city – with at least four pilot zones of each by autumn 2019”. Read more here

Clean Air Plan: the Council has missed the government’s end-2018 deadline for deciding its preferred choice from the short list of options for getting air quality within legal limits, and seems unconcerned about it. It is not alone – see comments on other cities below. When recently asked for the reason for the delay, Mayor Marvin Rees explained that the technical modelling work has not yet been finished and “the results … will gradually begin coming through over the coming months”. He also says that government should play its part – “they could commit to a diesel scrappage scheme, giving support to people affected. Success in tackling poor air quality will be dependent on adequate funding.” In a recent BBC Points West programme, he said he is reluctant to charge people to drive and he won’t be rushed into a decision. “It’s a multi-dimensional thing, not a single issue campaign”.

Nottingham was the first council to have its plans approved by government. The plan includes retrofitting buses to reduce emissions, but they have not needed a Clean Air Zone. Comment: I wonder if this is because their tram services and Workplace Parking Levy have reduced traffic volumes ?

Leeds council’s proposals for a Clean Air Zone have been rejected by government. The council requested £40 million to fund the scheme to put the necessary infrastructure in place and to support affected businesses. Comment: that decision sets a benchmark for other cities’ bids for government funds.
Birmingham has submitted its plan for a Clean Air Zone with a charge of £8 per car. They await government approval.
Southampton proposes a Clean Air Zone that does not cover cars, and has completed its public consultation. It plans to submit its proposals to government at the end of January.
Derby will not be introducing a charging Clean Air Zone. They are re-consulting, this time on proposed changes to a few city centre streets to reduce the chances of congestion building up, because 75% of consultees voted for that option. This includes taking out a cycle lane and bus lane in order to ease congestion as an answer to poor air quality ! See here.

Bath has consulted on a central Clean Air Zone with a charge of £9 per car. This has led them to undertake further statistical and financial modelling work to review the proposals.

ClientEarth has commented: “What we are concerned about is a lack of government leadership on this. Things are coming out in a piecemeal fashion, different schemes being put forward by different authorities of different quality, with different charging levels with different exemptions. It is creating a very confusing picture and it is coming across as pretty shambolic.” The government has described its latest initiatives and how they fit into a coherent approach – see here

Beelines in Manchester. They want to use simple zebra crossings across side turnings, and are pushing the DfT to relax the regulations on zebra crossings. For an illustration, see the Beelines proposal here (Figure 14, page 38).
Edinburgh city transformation project: initial consultation has just ended on proposals to make the city centre better for those walking and cycling and arriving on public transport. The proposals include vehicle–free Open Streets on the first Sunday of every month – like Bristol tried a few years ago with ‘Make Sunday Special’.

Milton Road, Cambridge: the Greater Cambridge Partnership has been consulting on a road scheme that includes segregated cycle lanes and enhanced streetscape – might we see similar changes to a Bristol arterial route ?

Cambridge mass transit Metro: a consultants’ Options Assessment Report for mass transit from early 2018 recommended an approach called “Cambridgeshire Autonomous Metro (CAM)”, which seeks to combine the network coverage, capacity, ride quality and connectivity of other systems with emerging technology for driverless vehicles and automatous guidance without rails or guideways. The system uses small rubber-tyred vehicles on a normal paved surface. It goes underground - in small single-bore tunnels, only where a segregated above-ground route cannot be provided. Services would operate at high frequencies of 25 vehicles per hour. See the full report here. It will be interesting to see whether the imminent feasibility study of Bristol mass transit proposes a similar system.

‘Transform your streets’ campaign: Cycling UK and Living Streets have launched a joint campaign to urge the government to provide funding for the schemes currently being drawn up by local authorities in their Local Cycling and Walking Infrastructure Plans. The campaign asks the question, “would you rather rush across busy junctions, dodging traffic, or have a dedicated space to walk and cycle?” They chose Pulteney Bridge in Bath for a visualisation of how a street can be transformed – see the campaign page here.

National Cycle Network review: Sustrans has announced a review of the NCN. Whilst the NCN has been a success, it is vastly underfunded – an example of the imbalance in government infrastructure expenditure on sustainable and non-sustainable transport modes. Sustrans is open about the NCN’s poor quality in places – see Guardian article ”.  read more.

Close passes: cyclists can be scared by overtaking motor traffic that passes too close, which has prompted Cycling UK’s ‘Too close for comfort’ campaign – see video here. Police forces are starting to take this seriously, with the aid of ‘close pass mats’ and Virtual Reality sets supplied by Cycling UK – see here.

Bath trams: a group is lobbying for trams to be considered for Bath – see impressive website here . They held a conference in November.

Bath Alliance for Transport and Public Realm: this alliance of 15 Bath organisations was formed to urge the Council to develop a transport plan for the city. They held a conference in November.

Simpler, Safer Junctions for All: Jonathan Flower of UWE gave a talk to the November BWA meeting about research exploring the implications of turning vehicles giving way to pedestrians and cyclists. The research recommendations included a change to the Highway Code to introduce an overarching duty to give way on turning - something that others have been calling for. A one-page summary of the research may be found on Jonathan’s blog site here.

Cycling doesn’t have to be dangerous: “Every local councillor, every planner and every highways engineer should watch this”. A brilliant video in which Chris Boardman compares cycling in Holland and Britain. See 5 minute video here.

Celebrating Bristol’s cycling network: the Council is making people aware of what has already been achieved as a cycling network – more than you might think – see here. Cycling campaigners want much more – segregated routes to make cycling feel safe – see the Boardman video above.