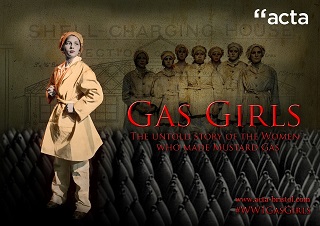 Acta are touring Bristol with this play telling the true story about Bristol women workers who made Mustard gas in the First World War and performing it locally on: 24th June at Orchard School, Horfield @ 7pm

“How would anyone even know there was a story to tell, if I said nothing? So I passed it on, the story, everything that happened, all about us Gas Girls.”

Following the sell-out preview week in March, acta's riveting and moving new play about Bristol women munitions workers in the First World War tours Bristol with a cast of 20 local people of all ages.

In 1918, Avonmouth was the centre of Britain’s chemical warfare industry, with two factories making and filling shells with deadly Mustard Gas, employing hundreds of local women and girls. There were hundreds of accidents, nearly three thousand casualties, and several deaths.

Gas Girls tells the story of these women, the beliefs that drove them, the hardships they lived with and the friendship and humour that bound them together.

‘This is an amazing story, and the more we’ve found out, the more amazing it has become’, says acta’s Artistic Director Neil Beddow. ‘The Government had decided that Mustard Gas was key to winning the war, and the women worked in extraordinarily dangerous conditions, with terrible consequences to their health. But they kept going, they kept working, and the play is about how they did that, and what drove them to carry on.’

The play, created by acta with the cast of 20 local people of all ages, will be touring to various community venues around Bristol in June.

The show will be performed near Bishopston on 24th June at Orchard School, Horfield @ 7pm. All tickets only £3
Tickets available from www.acta-bristol.com

See the ITV news coverage of the show here: http://www.itv.com/news/west/update/2014-03-18/theatre-group-tells-story-of-wwi-mustard-gas-factory/