Air Quality in Bristol – A report on the Civic Society’s meeting of Oct 8th, 2014 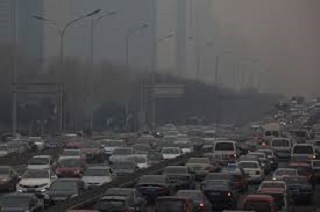 Two complementary lectures, on aspects of Bristol’s air pollution were given by Steve Cranshaw and Dr Angela Raffle. Steve’s talk took a largely scientific view of the air pollution situation both in Bristol and nationally. Angela’s talk looked at some less conventional ideas and strategies....

.....that are being successfully implemented to try and deal with the problems created by our present somewhat fixed notions and narrow vision of planning for transportation in urban environments.

What follows is a selective summary of some of the most important points of the two talks with links to websites mentioned by the speakers. The links offer more information on aspects of air pollution and how we could better deal with urban transport.

Steve works in the BCC’s Sustainable City and Climate Change Service. One of its major concerns is the effects of poor air quality on our health.

The EU Air Quality Directive sets out limits for a range of air pollutants with which member states are required to comply. The main pollutants are:
•    PM10 – Small particulates largely produced by diesel exhausts. Bristol has met the target for these, but there is no safe limit
•    PM2.5 – Ultrafine particulates, from diesel exhausts, target for which we have not met, nor has this been achieved nationally. These particulates are strongly linked to effects on health
•    NO2 – Nitrogen dioxide. Stringent targets exist for this pollutant and at present in Bristol we are not complying with these.

It was predicted, as a result of improvements in car engine design, that NO2 levels would slowly decrease between 2001 and 2011 but this did not occur. Some of the main reasons for this were:
1.    Petrol car exhaust catalysts degraded faster than predicted
2.    Catalysts in HGVs are ineffective at urban speeds
3.    An increase in diesel cars and vans
4.    Bus emissions are static

Bristol’s responses to this are:
•    Bidding for a European fund to improve air quality
•    Employment of electric and hybrid buses
•    Investment in cycling and walking
•    Metrobus development
•    20 mph limit for all of Bristol
•    Retrofit of more efficient engines for buses

Steve also directed us to an interesting and interactive website which compares statistics for the main UK cities relating to various urban parameters, including transport: Luminocity
This website(as it states) ‘is a mapping platform designed to explore the performance and dynamics of cities in Great Britain. The site brings together a wide range of key city indicators, including population, growth, housing, travel behaviour, employment, business location and energy use. These indicators are mapped using a new 3D approach that highlights the size and density of urban centres, and allows relationships between urban form and city performance to be analysed’.

Angela works for Transition Bristol. Her talk was concerned with the need for urban planners to move their focus away from prioritisation of the car and look instead at reorganisation of urban traffic for the benefit and movement of people and goods. She began by recommending that we watch a short video on the internet called ‘The Overview Effect’, see here
This sets the context for much of what underpinned her talk – the need to take a holistic view of the earth and its atmosphere as a fragile planet with the thinnest of skins. We cannot continue to treat it in the reckless way we have been doing if we want the planet and us, humanity, to survive.

We were introduced to the work of the Institute for Transportation and Development Policy (ITDP). This organisation provides technical support and planning expertise to local authorities around the world. They have set out eight principles which guide their work in aiming to deliver a higher standard of living and quality of life for citizens of cities around the world:
•    Develop neighbourhoods that promote walking
•    Prioritize non-motorized transport networks
•    Create dense networks of streets and paths
•    Locate development near high-quality public transport
•    Plan for mixed use
•    Optimize density and transit capacity
•    Create regions with short commutes
•    Increase mobility by regulating parking and road use

Much more can be found out about the ITDP and their inspiring work on their website: https://www.itdp.org/

There are many obstructions that wilfully or otherwise get in the way of applying these eight principles, including:
•    The covert influence of the road lobby
•    System rules based on car priority
•    Politics, local and national
•    The quest for a (non-existent) magic bullet to cure urban congestion and its associated high levels of air pollution.

The effecting of these eight principles is of course not easy given the present car culture that has, in the past, been a major influence in the central thinking of urban planners of cities like Bristol. Nevertheless the ITDP  has been responsible for setting up highly successful major urban transport schemes such as in Buenos Aires, Argentina (a bike share scheme and Metrobus line), Guangzhou, China (a Bus Rapid Transport system) and Mexico City (a bike share system). There is much that Bristol can learn from, and more importantly adopt and apply from these eight principles.

Are there any positive examples that we are moving towards a more sensible approach to transport use? Yes and interestingly, this is coming from grass roots level. There are clear signs in Bristol of a significant change in the way people are choosing to commute to work. For those under 40 who work in the city, it is now normal to leave the car at home. Since 2001, bike transport in Bristol has gone up by 91%. And perhaps the most encouraging and indeed amazing of statistics: Bristol now has more bike commuters than Sheffield, Newcastle, Manchester and Liverpool combined!