Memorial Ground - a secure future as both a war memorial and sports ground? 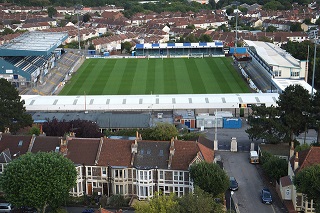 With the recent purchase by Wael Al-Qadi of the Bristol Rovers Football Club and its old Memorial Ground site, which has been listed as an Asset of Community Value, it looks as if there is the real possibility of a sympathetic development of the site. The Bishopston Society has written to the new owner and the Club's Board of Directors.

A copy of this letter reads:

The Bishopston Society would like to strongly support the group that has been formed to save the Memorial Ground in North Bristol.

After several years of uncertainty as to the future survival of the Memorial Ground and with the serious likelihood of the Ground’s destruction and conversion to yet another local supermarket, we have been heartened to hear that you have now acquired the Bristol Rovers FC and its historic Horfield ground – a situation which we feel offers real hope for a sympathetic development of the site.

As a Society, one of our major aims is that of securing the preservation, protection, development and improvement of local amenities and other features of historic and/or public interest. We therefore applied to Bristol City Council to have the Memorial Ground listed as an Asset of Community Value. This ACV status has now been granted, which as you will be aware, offers some degree of protection against future development plans. It requires that material consideration be given to this designated status in any planning application for the site and it can be used by the Planning Inspectorate as a factor in refusing planning permission for change of use or demolition.

We understand that you have been fully appraised by the group seeking to preserve the Ground, as to its sporting history and its role as a First World War memorial and we would not wish to add to this. We would however emphasise the significance of the Memorial Ground as a much valued local historic amenity with a dual heritage as a nearly hundred year old rugby ground and as a memorial to the local ruby players who lost their lives in the First and Second World Wars.

The Bishopston Society is committed to and active in promoting high standards of planning and architectural design in and around Bishopston. We would therefore wish to reiterate how important we think it is that whatever redevelopment is proposed for the site, serious consideration should be given to its design and appropriateness within its context of an essentially residential neighbourhood. Such a sympathetic approach would be manifested if planning for any future development prioritised the following two intrinsic requirements: firstly the need to recognise and respect the war memorial status of the site and secondly to observe the Restrictive Covenant on the land which requires that it must be used for sport or recreation.

We would like to invite you and the Directors (or a representative from the BRFC) to the Society’s public meeting on April 15th at 7.30pm. The venue is the Bristol Pavilion at the Gloucestershire County Cricket Club ground where the guest speaker will be the local MP, Thangam Debbonaire. Also on the agenda will be an item looking at the future of the Memorial Ground.

The Bishopston Society looks forward to working with you in partnership during the consultation process on the future development of the Memorial Ground, a much loved, unique site of great historic and community value.

The Civic Society has included the identification, listing and conservation of National War Memorials as a major item on its agenda of issues it is presently pursuing with the aid of its members. A short video on this topic can be seen here