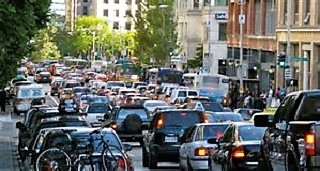 Given the concerns about air pollution within Bishopston expressed in The Bishopston’s Society’s public meeting on April 4th 2017, and given that part of the solution will inevitably be political, The Bishopston Society put the following question to the “Metro mayor” candidates at hustings organised by Bristol Women’s Voice on Monday April 25th :

Local people are worried about the effects of air pollution especially on the health of children and older people: women are usually the main carers so this is of particular importance to them. So, apart from the £500,000 coming from the central government Clean Air Fund (for a feasibility study) to Bristol and South Gloucestershire, what else will you do to reduce air pollution?

The Mayor of the new West of England Combined Authority (WECA) will have responsibilities for the post-16 further education, apprenticeships and adult skills budget and a strategic development plan which will include housing and responsibility for transport (rail and bus franchises). There will be a budget of £900 million over 30 years for development in economic growth. The Mayor will have the role of bringing together the local authorities of Bristol, Bath and NE Somerset and South Gloucestershire, and other private and community and social enterprise partners, to improve the economic development of the region within the scope of these three areas of responsibility. The mayor can also ask central government for additional powers and can advise government where its policies are disadvantaging this region.

These responsibilities clearly give the Mayor a lot of opportunity to make an impact on air pollution, especially as this position has considerably more power over rail and bus services than the local authorities themselves.

. Some of the candidates said they agreed with some the issues previously raised, but this is some of the things they said, in the order they spoke, though you will need to look at the candidates’ manifestos for the detail of their vision and where their priorities might lie:

I was asked to make a response. I said I was disappointed that none of them had specifically said that they would use the planning powers to ensure the walking and cycling environment would not be a secondary add-on, but would rather be designed to be attractive and pleasant to encourage people to see it as a reasonable alternative to using vehicles.

Their responses covered a wide range of ways of dealing with air pollution, so plenty of ideas for whoever wins the election. It is only be reading between the lines of their manifestos that you can you discern which candidates are likely to see reduction of air pollution as a high priority – and even then it will be up to us to monitor their progress and make him or her accountable to us, the voters.

There is some more information about the new authority here