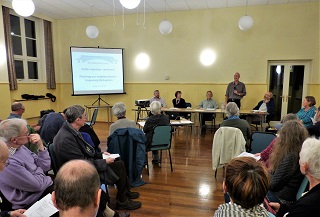 At a lively public meeting of The Bishopston Society on 2nd October, a range of powerful ideas for improving Bishopston was gathered.

The ideas were the meeting's response to the key question of the evening, "How can we as ordinary citizens exploit people power to improve Bishopston?", following and in conjunction with our guest speakers.

Confronted with how best to become involved in neighbourhood planning to improve Bishopston, it quickly became apparent to those attending the meeting that one has to first understand something of the processes, complexities and indeed weaknesses of Bristol City Council’s planning system. Only then could local civic-minded individuals realistically make effective use of the system, in particular to tackle poor planning applications and influence subsequent council decisions on these.

Our three speakers between them looked at differing aspects of the planning system, at city, regional and national levels. 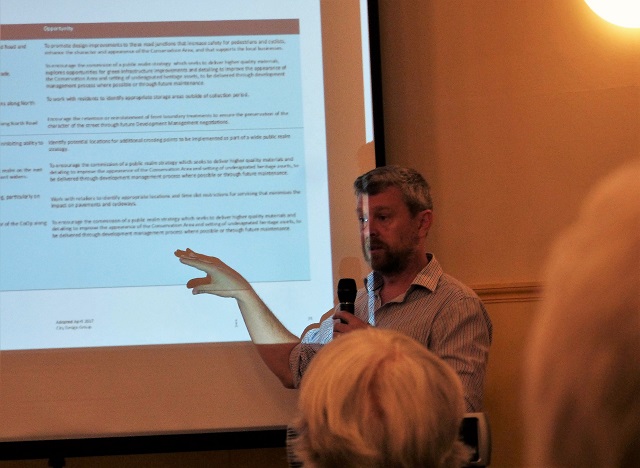 Peter Insole from the City Design Group of BCC summarised how the identification of thirty three Conservation Areas across the city - areas of special historic and architectural interest with a distinctive local character - has given a certain degree of protection from insensitive and inappropriate planning developments.

The recent extension of the Gloucester Road Conservation Area, with which TBS was involved in both arguing for and identifying, has resulted in a long stretch of the road from the Arches to the Sommerville Road junction and part of North Road now being included within this designation. The full background document which describes the Gloucester Road Conservation Area can be seen here. 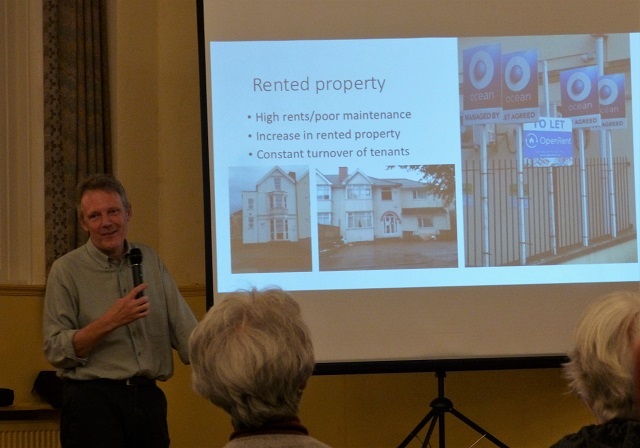 Neil Embleton, an architect and the Society’s spokesperson who responds to local planning applications outlined and illustrated some of the issues and problems arising from poorly designed planning applications that are submitted with little thought for their jarring effect on the original appearance of our Victorian and Edwardian streets. Many dormers and extensions built into roof spaces are particularly prone to ugly designs.

Converting front gardens to parking spaces also changes the local street scene for the worse, cumulatively reducing the important green space that our gardens create for biodiversity and also often having an adverse effect on natural drainage.

Government legislation has introduced Permitted Development, ostensibly to help boost the economy, but effectively allowing such developments to go ahead without requiring scrutiny or vetting by the Planning Authority. In addition to allowing roof extensions and parking in front gardens, Permitted Development now also allows the temporary change of use from shop to café, without requiring the normal quality checks.

A recent local example of this is at 164 Gloucester Road where over 50 objections were received from local residents. We have an option to try and change this legislation through lobbying of our local MP. See more on this here.

We are of course largely powerless to influence large scale planning developments such as the 6000 houses being built just outside our area in South Gloucestershire around Cribbs Causeway and Patchway. This will considerably increase traffic volume along the Gloucester Road and doubtless exacerbate local parking problems.

Removal of the toll on the Severn Bridge is predicted to create another 16,000 extra cars a day using it, many of which will be coming into the Bristol area. Local large-scale economic development of new Lidl, Aldi and Home Bargains stores now being built on Muller Road will only make traffic problems in this area even more difficult than at present.

Gentrification of the area with many newer house buyers coming from London means there is pressure to enlarge properties. Associated with this change in affluence and local demographic, there is also a growing trend for more and larger vehicles per household. We will need to be active to try and combat the worst of these effects.

Pushing for local Residents Parking Zones in Bishopston and St Andrews and trying to extend Conservation areas into some of our more architecturally interesting and diverse streets are two possible measures we need to consider. 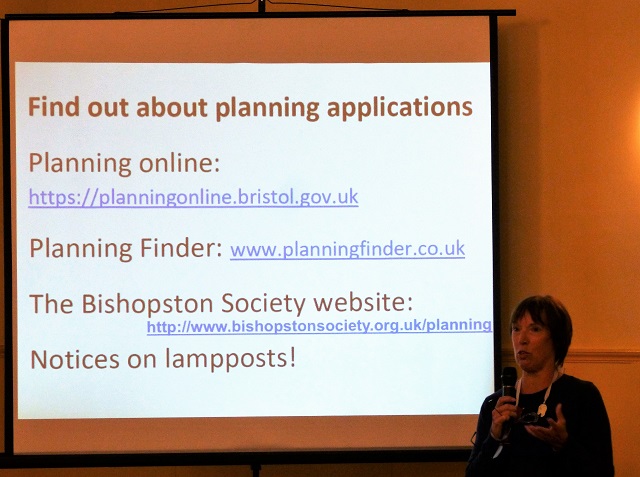 Alison Bromilow, representing Bristol Neighbourhood Planning Network (and active  in the Bishopston, Cotham and Redland Community Partnership and other local organisations) then took us through the three levels of planning – the National Planning Policy Framework (NPPF), the Regional Joint Spatial Plan (JSP) and the Local Plan.

While we can have little effect on the NPPF or JSP, we can affect what happens in our area by becoming involved in the Local Plan. There is a possibility in theory of developing a Neighbourhood Plan but little practical merit.

We can find out about planning applications on line at BCC website here and TBS’s new Planning Portal. Comments on any application have to be summarised by the Planning Officer.

Alison’s advice on commenting on planning applications is to:-

Other suggestions from the meeting included:-

Armed with all this information and with input from discussion groups on priorities for improving the neighbourhood, a strong feeling emerged that we local citizens could indeed have a positive effect on future developments, and that policy changes could emerge from "bottom-up" pressure developed by local organisations working more closely together for change and improvement in our planning systems.

We'll be analysing the outputs from the small-group discussions and publishing more here on our web site in due course to follow up this public meeting.

Our earlier article previewing the meeting is here.