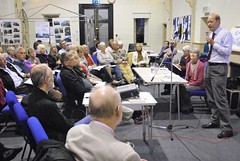 A fascinating insight into the plans for a new medical practice, and much more, was given at the The Bishopston Society AGM.

Contributions from guest speakers included revelations from Mark Allen of The Spence Practice about the nearly-complete Bristol North Baths redevelopment.

The AGM took place on 30th September when a considerable number of members (over 50) attended.

The formal business of electing the current committee for the forthcoming year and confirmation of Jenny Hoadley as our Representative on the NP was quickly completed. The winners of the competitions held at St Bons and St Andrews Park were announced (James O'Dwyer and Matt Wells) – they will be given the choice of a bottle of wine or a bottle of olive oil as their prize.

Sylvia Townsend updated us on the Resident's Parking Scheme for Redland and the last part of Cotham. The people in the  area north of Redland Green did not want an RPZ so the scheme will be from Redland Road as far as Redland Green, up Cranbrook Road  to Dugar Walk and the part of Cotham not yet included. If you look at the Council website www.bristol.gov.uk/RPS  you will find full details including the cost of permits.

A feedback report will be published on the internet prior to formal consultation which is planned for November 2013. Once in place, the scheme will be reviewed annually. (No doubt when commuters are dislodged down the hill to Bishopston, St Andrews and the remainder of the Redland ward, we will be clamouring for  Residents' Parking Schemes here!)

Mark Allen, Practice Manager of the Spence Practice, explained how the Spence GP Practice and the Nevil Road GP Practice are merging to become the Bishopston Medical Practice, based in the newly refurbished Bristol North Baths. Mark lives and works in Bishopston and has a lot of local connections and is delighted that the Baths will be retained as a local 'iconic' building and for the use of a lot of local residents. He told us how the Spence Practice started in 1949 on the Gloucester Road and the various addresses it had used until the current site on Logan Road.

The idea of moving into the Baths was conceived in 2006 but due to delays in planning, the recession etc., the move will not take place until November or perhaps December 2013. The surgeries will be on the first floor (there is a lift) with the ground floor being used by the Keith James physiotherapy practice with a hydrotherapy pool in the shallow end of the original pool. There will be a Community room available for hire when not being used by the medical practice.

Other services there, apart from the GPs and nurses will include visiting community midwives, podiatrist and dieticians. The old changing rooms are being converted by the developer, Chatsworth Homes, for possible lease for advanced clinical services previously provided at Southmead hospital.

Mark went on to say that work on the library and flats has started and as soon as the car park is cleared of building supplies etc. the surgery will be able to move in. The car park will, as we knew, have fewer spaces than before but the Practice hope to renew their lease on spaces at St Bonaventure’s where staff will be able to park. Mark concluded by saying that he and the staff are excited at the prospect of moving to the new centre very soon.

Mark answered a number of questions including where the flat owners will park? (9 out of the 10 have already been sold 'off plan'). He understood that they have allocated space in the car park overnight but not in the daytime. Will the practice be producing some of its own electricity?  Mark said that the health centre has a combined heat and power plant, so yes, as well as a number of “high tech” energy conserving features.

'Is there is to be an open day? Mark replied that  'we’d like there to be and will consider it, though recognise the practical difficulties, both that it is currently a working building site and then subsequently time will be limited to fit out the site and prepare it for business'.

The final question was, what is happening to the buildings on Logan Road? Mark said that the property belongs to the partners, and he had not played a part in their plans for the future of the buildings so was sorry, he didn't  know.

When questions were asked about the library, Sylvia Townsend was able to help in her capacity as a former member of the Library Select Committee when she went to look at how new libraries worked in this day and age. She told us that the library will be on two floors and will have two car parking spaces allocated for specific use of the library.

The public car park will continue to be managed by the Council and the few spaces in the rear car park will be for the tenants of the Medical centre. The new public toilets will be positioned by the Baths and will probably have the same opening hours as the old ones. Sylvia said she would see what can be done about organising an open day – she expects the library to open to the public in the spring.

Liz Kew, on behalf of ‘Gloucester Rd in Bloom’ fundraising group presented Elinor Edwards with a thank you certificate for the money that the Bishopston Society donated. All agreed the hanging baskets had been a great success. Next year, without this year’s £2,000 contribution from the Neighbourhood Partnership,  residents, community groups and Gloucester Road Traders will need to work together to raise money if we want the hanging baskets again. Liz asked members to help by considering money raising schemes such as hosting a coffee morning.

The meeting finished with the Open Forum when people brought matters that concern them to the attention of the meeting – these included 'why were the trees on the promenade cut down'? The answer was that they were diseased and the new trees would be small leaf limes which should fare better there.   Concerning the influx of this year’s new students – Liz has some leaflets which can be given to welcome new students to encourage them to be good neighbours.

Another member pointed out that the number of houses planned for  the old Filton airfield site means the traffic going up and down the Gloucester Road would be greatly increased. Was there a Gloucester Road Traders Association? The answer is yes – a further question asked, 'has the Association ever asked the community what they would like?  People working in the daytime found it impossible to shop locally other than in a supermarket.  Perhaps they should open later for one day a week?  Another point was raised about the number of licensed premises – Liz said that if local residents don't complain to the local authority  or the police about antisocial behaviour problems then when the Bishopston Society objects to a new application, the Licensing Sub Committees won't have any evidence as  to what is happening locally.

At the end of the meeting, we had a sociable half hour with refreshments, the opportunity for a chat and time to look at the excellent display our committee member, Neil, had produced.