Our AGM: Three inspiring 'green theme' talks were given 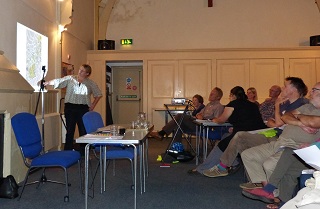 The Bishopston Society 2014 AGM held on Monday, Sept 29th proved to be one of its most interesting annual meetings. The audience of around forty or so heard the fascinating accounts of three different neighbourhood enterprises that had a common theme of the development of local green spaces for the benefit of the community. Each of the three speakers shared a tangible and infectious enthusiasm for their project which was clearly reflected in the manner in which the voluntary groups involved in these projects strived so hard to achieve the extraordinary levels of success that they have realised.

Nikki Morgan told the story of The Golden Hill Community Garden, which after four years of difficult physical work and fund raising has now been converted from an overgrown, waterlogged area close to Horfield Prison into a thriving collection of allotment plots that runs as a self supporting and sustainable operation. All this, despite the considerable challenging difficulties that have been confronted in the process, has been achieved through the commitment and persistence of its dedicated volunteers. 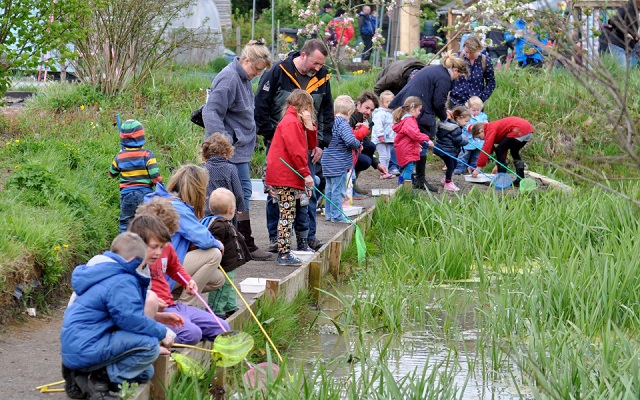 Nikki described the way the site has been transformed, with the construction of a pond, raised beds, decking and the opening up of the Garden for use by a variety of local groups, of all ages and abilities, who can choose to be involved in a range of tasks of varying complexity and where attendance can be very flexible.

The most recent development is a project nicknamed the ‘Tower of Power’ which uses the energy from solar power via photovoltaic cells to move the ample water on site 300 metres distance and 14 metres uphill. Here two 6000 litre tanks store the water before diverting it into a system of irrigation for the plots below. In just the first few months of operation, this scheme has saved £500 off the water bill.

More about this project can be found on their website here

Sam Thomson was the next speaker. She gave an inspiring, illustrated talk about the achievements and future plans of the Friends of Horfield Common. This group has, at times had to face an uphill struggle with the Council to bring about the changes to the Common towards which the Friends have been working so hard. It needed an inspired vision of how this large green space could be transformed from a rather mundane and run down area into something offering the local community a really exciting mix of resources and leisure opportunities. The Friends have clearly provided such a view, but importantly, have been prepared to consult and incorporate the ideas of the local community into their plans and then to persevere in their efforts to steadily bring these about. 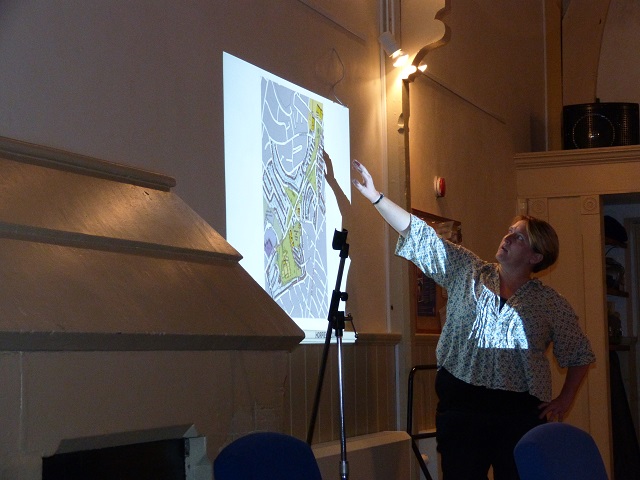 Sam made it clear how the Friends have been working on several fronts, getting funding for tree planting *, and one of their first big successes, persuading the Council to completely renew the rather dilapidated children’s play area. This is now completed and so successful it is attracting users away from the only other comparable and very popular neighbourhood playground area in St Andrews Park.

A major future project for the Friends which is clearly going to occupy much of their energy and enthusiasm is the restoration and development of the Ardagh, a central area of the Common which has tennis courts, a bowling green and pavilion. The pavilion building is in serious need of repair and maintenance and this and the area occupied by the eleven tennis courts, bowling green and putting green is seen as one which has considerable potential for partial conversion to allow a much greater diversity of activities, including a café, and general meeting space for community groups, youth clubs, dance classes and so on.

The final talk of the evening was from Shannon Smith whose subject, the Horfield Organic Community Orchard (HOCO) was clearly one to which she is deeply committed.  Of the three projects described at this meeting, this one has been in existence the longest, having originally started back in 1998. Its inception was in part the result of a response to a depressing and increasingly widespread national trend of grubbing up of old orchards with its corresponding effect of a decline in the diversity of fruit varieties.

For Orchard Roots Bristol, a Heritage Lottery funded project, HOCO teamed up with researchers at University of Bristol’s History Department. The group shared their knowledge and experience of an urban orchard regeneration project with those working in the Quantocks Area of Outstanding Natural Beauty aiming to encourage the sympathetic restoration of old orchards and the planting of new ones. This project also enabled the group to research the history of land use for food production in the Golden Hill area. Even in the 1843, the Horfield parish map shows the distinctive elbow shape of plot No 58, now occupied by the Orchard. 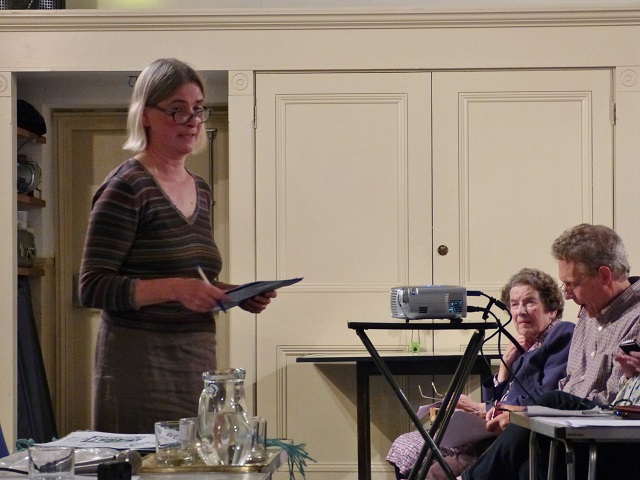 The Orchard is a haven for nature and people – it’s often described as a “hidden gem” by people living nearby.Taking over an old neglected and overgrown area of allotments, the Friends of  HOCO have now, after a huge input of hard work, established a thriving collection of over a hundred fruiting trees, bushes and vine The original underlying aim ( largely achieved if you count rhubarb as a fruit) has always been to grow fruit that can be eaten fresh fresh throughout the year. Thoughtful planting and good storage achieves this. Harvesting from the 45 different varieties of apples, 12 varieties of plums and 6 of pears has been made as easy as possible by planting trees grown on dwarfing rootstock and trained so the fruits can be reached while satanding on the ground.

With the help of a Well Being grant from the Bishopston, Cotham and Redland Neighbourhood Partnership, a new project is now being developed.  This Home Orchard Plot is designed to demonstrate how a small 4 x 10 metre plot can be intensively planted up to grow a variety of fruits.

The Orchard costs around £1000 a year to run, and is reliant for funds on the generosity of its Friends, both working members and supporters. A recent Heritage Lottery Fund has allowed the group to research the history of the area now occupied by the orchard. Even in the 1843, the Horfield parish map shows the distinctive shape of  what was plot No 53, now occupied by the Organic Orchard.

The Orchard costs around £1000 a year to run, and is funded by subscriptions from working members and the generosity of supporting friends, and the income raised at public events such as Apple Day and Wassail.  All are welcome to celebrate Apple Day at the orchard on Sunday 19 October, 2-4pm.

Each of the images opens up into a bigger file which you can see individual trees on.
To sponsor a tree, you can either pay via the online shop on our website here or drop a cheque payable to Friends of Horfield Common in to my house (c/o 16 Oak Road, Horfield, BS7 8RY). Sponsorship of an individual tree (3-4m height), which includes a commemorative plaque and a unique artist's map of the common with your tree highlighted on it costs £300.00 - including 2 years watering and maintenance by Bristol City Council.

To choose an individual tree - if you get in touch - we can pop round with a printed map of the complete common so that you can see which ones are available and which one you would like.

The Bishopston Society
"There’s huge unmet demand in Bristol for safe bike storage, and we’re in a climate crisis where we urgently need people to switch to active travel. But lack of secure bike storage at home is a huge problem and it’s the less well off people who are hit hardest by it. They’re less likely to have storage space and less able to replace a stolen bike. This is a social justice issue.”

The Bishopston Society
Increased visitor numbers and numbers of dogs roaming off the lead are believed to have contributed to a recent decline in the skylarks’ population. Skylarks build nests on the ground which are very hard to see and their eggs are also well camouflaged. Dogs off leads can easily trample the nests.

The Bishopston Society
The five Dawkins pubs in Bristol are the Miners Arms in St Werburgh’s, the Hillgrove and the Green Man in Kingsdown, and the Victoria and the Portcullis in Clifton.

The Bishopston Society
A well known author from St Andrews has written another great sounding book on some of the curious aspects of Bristol.

The Bishopston Society
“Wood burning in homes has crept up under the radar while we all focused our attention on diesel traffic. We can count cars and lorries on our roads to understand the pollution that comes from traffic. But we have very little idea of what people are doing in their own homes.” https://www.theguardian.com/environment/2021/feb/20/hearths-on-fire-uk-residents-incensed-by-pollution-from-wood-burners?CMP=Share_AndroidApp_Other

The Bishopston Society
The plans for development of 102 Gloucester road (Nailsea Electrical) have been accepted. 9 dwellings will be built and a NE showroom and offices will remain. The NE warehouse will be relocated to Hengrove. Details here: https://pa.bristol.gov.uk/online-applications/applicationDetails.do?activeTab=documents&keyVal=Q3OH0GDNL6I00