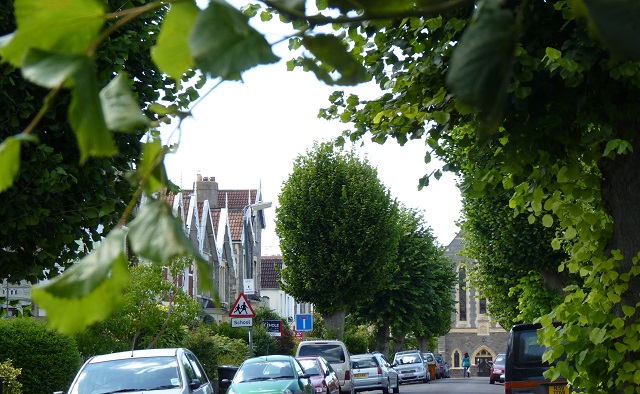 The audience of about 40, including three of our local councillors, heard three varied and engaging guest presentations:
from Andrew Garrad, Chair of Bristol 2015
followed by Tracey Wintle, Supervisor of Redland, Clifton and Cheltenham Road Libraries
and ending with Liz Kew from Streetscene

followed by the customary searching interventions from the floor.

The meeting started with the formal business of electing officers for the year 2015/2016.  The current members of the committee were re-elected, but not before Elinor Edwards (Chair) and Rose Boswell (Secretary) had stood down  -  after a combined total of 15 years' service to the Society.  They were both delighted to be presented with a bouquet of flowers by Dick Farrow from the committee.  Bev Knott also proposed a vote of thanks.

After approval of the Annual Accounts, and the announcement of the winners of the 'Spot the Location' competition held at St Bons Summer Fair and the Community Fair, we moved on to hearing from our speakers

Andrew Garrad told us about what has been happening since Bristol became European Green Capital 2015.  This is a prestigious award which comes with no money attached but gives us the opportunity to put Bristol on the world map.  Following on from Copenhagen in 2014, Bristol won the award based on what it has already achieved, but has been building on this since the beginning of the year with 3 key goals  :-

105 separate projects, large and small, have been initiated and/or supported, across a wide range of fields such as transport, food, waste and cultural diversity.  Partners have ranged from large industries to small local groups.  Andrew said that he is particularly proud of the educational programme, meshing into the curriculum in schools.  There is even a Shaun the Sheep computer game now available which pushes the Green message!

It is hoped that all the efforts of 2015 will take root for the future, and will enable Bristol and its people to continue improvements in sustainable, low-carbon living.  Key to this will be not only the Green Capital Partnership (a network of over 700 organisations working to make Bristol a more sustainable city), but the commitment of individuals at a local neighbourhood level.

The “book” of how to be European Green Capital, didn't exist before, but now it's being written  -  the Bristol Method is pulling together all the lessons learned in Bristol, to share with others across the UK, across Europe, and globally.  Meeting environmental challenges faces cities all over the world, and the knowledge gained here in SW England can be shared and built upon.

Andrew is clearly excited by the work being done in Bristol, and inspired us with hope that progress can be made.

Our second speaker was Tracey Wintle who told us that the new Bishopston Library is now not scheduled to be open until Spring 2016.  This is not entirely unexpected by Bishopston Residents given all the set backs that have taken place.  However, as soon as they get the go ahead, Tracey and her team are ready to have the library fitted out and be open to us in the shortest possible time.

After a public outcry, the city council have abandoned their plans for large-scale library closures.  They are now consulting library users on the hours and days the libraries will be open, with options balancing weekend opening against  evening opening during the week.  Tracey encouraged those at the meeting to complete the consultation forms.  (The consultation forms are also available both in libraries and online.)

We next heard from Liz Kew.  The Streetscene Group has evolved from Liz's early “guerilla” days of cleaning graffiti and taking down flyers. A variety of different approaches are being used - from Street Champions to Community Pay-back, from checking waste provision in planning applications to involving younger people via social media.

Students are being invited to a meeting at  'The Bishop' in the hope of improving their knowledge of recycling, what to put in bins, security etc.  Liz also told us about the Gloucester Road Christmas plans for late night opening and for Christmas lights.

After an opportunity for the members in the audience to raise any questions generated by the evening's talks  -  Andrew Garrad will have anticipated that the subject of Bristol's buses would come up!  -  the evening closed with refreshments and a chance to mingle and study the photo display.