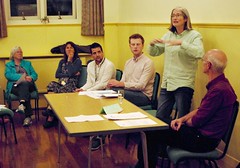 The Bishopston Society is ideally placed to take on the role of Bishopston’s “community hub”, or at least that’s a prospect emerging from the Society’s recent Annual General Meeting.

Contributors, including local councillors, helped us to get to grips with the changing political and economic landscape, and its impact on Bishopston’s communities and wellbeing. They supported The Bishopston Society’s work emphatically and spoke of the opportunity for it to develop into an “anchor” or “hub” role.

Community responses to the austerity agenda

Councillor Mike Davies (Labour, Ashey) set the scene by referring to Bristol City Council’s need to slash costs and sack staff in the light of the Government-imposed austerity agenda. This will clearly lead to bleak prospects for public service delivery.

Councillor Tom Brook (Labour, Bishopston & Ashley Down) stressed the importance of local community action as a response to this, and made clear his support for Bishopston Society’s aims for the future as a leading light in bringing communities together locally.

Councillor Eleanor Combley (Green, Bishopston & Ashley Down) developed the point by praising our ongoing work on planning applications, and in addition supporting a wider remit. Upcoming changes in the way that Neighbourhood Partnerships work (currently under consultation by the City Council) might lead to the need for a Bishopston “hub” to bring people together, she said.

The “hub” prospect had gained support earlier in the evening, and afterwards: “it’s clear residents of Bishopston have a high regard for The Bishopston Society and wish to see it become the community anchor – the umbrella for all things Bishopston” (Bishopston Matters, issue 101, Nov 2016).

The meeting took place on Monday 4th October 2016 at Horfield Quaker Meeting and featured the Society’s usual mix of guest talks and its legendary open forum, not to mention delicious organic fruit juice refreshments and lots of networking as usual.

But Society members and the public were surprised on this occasion to walk in on a disrupted floor plan, and following the opening formalities took part in an “instant consultation” exercise in small groups. This break with tradition was one result of the Society’s committee taking on a journey over recent months to review and modernise the Society’s vision, goals and strategy, and asking for member input.

Though time was tight, and guests were also press-ganged on the spot into completing a consultation questionnaire thrust into their laps, lively and energetic discussions took place on what TBS should be doing, and how each person could help do it.

Ideas emerging from the small groups included continuing work on planning applications, working more closely with other groups, encouraging ‘green” behaviour like walking and maximising open spaces, and being active in reducing “eyesores” in the built environment.

Additional offers and help and some new proposals for enhancing our partnership working also came up, and these are set to mitigate the “existential crisis” (in the words of meeting chair Dick Farrow) that has been facing the committee during its recent strategy review journey.

Additional contributions to the meeting included a fascinating round of community updates from Friends of the Mem, The Living Room Project, SENDaWelcome and Howzat.

News and views exchanged across the floor of the meeting included details of the forthcoming art banners on the Gloucester Road, another fine initiative from www.glosrdcentral.co.uk. And participants were intrigued by, and supportive of, a proposition to convert the Old Police Station into a microbrewery and public social space.

More news and views about these projects and initiatives, and more, will feature here on the Bishopston Society web site, as usual, in the coming weeks and months.