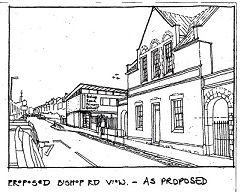 Nobody could say we didn't try! The Bishopston Society, very dissatisfied with the stark, modern design the council had approved for Bishop Road extension (see drawing) had offered a much more sympathetic, alternative design that reflected the building's late Victorian architecture.

It also thought the surviving architecture of the school had sufficient merit to be considered worthy of listed status. The Society therefore appealed to English Heritage to examine this possibility. EH produced a very thorough report, but in the end felt that the building did not quite meet the strict criteria for designation of listed status.The report can be seen in our earlier article.

Now, however, the Council Planning committee, who one might have hoped would have been sympathetic to EH's generally favourable view of the quality of the building, and therefore might have favoured the alternative TBS design (see below), has decided to use the original ugly design that had so dismayed the Society in the first place. 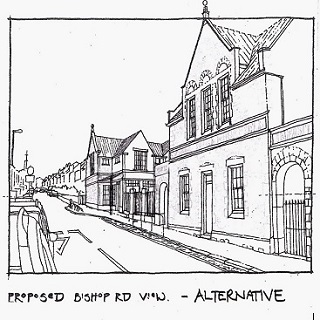 Some light has been thrown on this very disappointing decision by Fi Hance, local councillor and a member of the committee that made the decision. She says:

As a member of the committee, perhaps I could add a little additional information.  The discussion took over an hour, although in the end, it was voted through unanimously.  We were somewhat over a barrel since (as is often the case with school expansions) time was of the essence and, as you’re aware, we have to vote on the application on the table rather than on the basis of any altered designs that may be put forward.  So we were faced with accepting what many of us considered to be an imperfect design for the sake of primary school provision in the area which is sorely needed.

That said, most of the discussion centred around dissatisfaction over the design of the building, on the playing ground and access issues and by the time this discussion was exhausted there wasn’t much appetite for further discussion over the building on the main site.