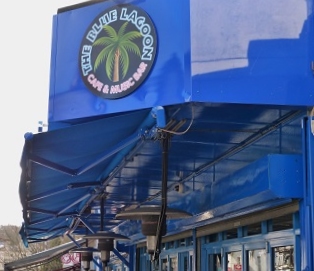 The owners of the Blue Lagoon, on the Gloucester Road, had put in an application for a replacement and extension of the shop front. The work to do this has now been completed, but was done without the application having been approved by the Council, who have now refused the application.

The Council is in the process of serving an Enforcement Notice to secure removal of the canopy. The agent has already confirmed that they intend to appeal the Notice, and it is expected that this process will take around 6 months.

The reasons for the refusal decision are given in detail below, although this is only an extract taken from the full Planning Department document that can be seen here: Blue Lagoon - Officer report.  The original response by the Bishopston Society to the application can be seen here: TBS response

Application No: 13/05098/F - Blue Lagoon  DECISION: REFUSED
The following reason(s) for refusal are associated with this decision:
Reason(s)
1. The replacement shop front, incorporating an enlarged canopy/ fascia and hanging patio
heaters to the front elevation, by virtue of design, materials, finish and appearance would
appear excessively large and dominant, failing to appear subservient to the host property and
appearing unduly prominent within the street scene. The proposed shop frontage, in
combination with the adjoining shop frontage at no 20 Gloucester Road, would create a large
combined frontage to the detriment of the visual amenity of the street scene and the
Gloucester Road Conservation Area.
The proposal is therefore contrary to Policy BCS21 and BCS22 of the Bristol Development
Framework Core Strategy (June 2011), saved Policies B2, B6 and B18 of the adopted Bristol
Local Plan (December 1997), Policy DM26 and DM31 of the Site Allocations and
Development Management (March 2013) and The Cotham and Redland Character Appraisal
and Management Proposals (September 2011).
Advice(s)
1. Refused Applications Deposited Plans/Documents
The plans that were formally considered as part of the above application are as follows:-
Site location plan, received 11 November 2013
B121319-01 - Existing ground floor plan, received 11 November 2013
Existing and proposed elevation, received 11 November 2013
Proposed ground floor plan, received 11 November 2013
Design and Access Statement, received 11 November 2013
Proposed elevation, received 17 December 2013
2. It has been noted that hanging gas heaters have been installed to the shop frontage/ canopy
area. These are not shown on the plans submitted with the application and are considered to
be unacceptable.

Article 31 Statement
The council always wants to work with the applicant in a positive and proactive manner. Unfortunately
the proposed development is contrary to the policies of the Development Plan as set out in the officer
report. Clear reasons have been given to help the applicant understand why planning permission has
not been granted.

The right to appeal
You have the right to appeal against this decision. Any such appeal should be made on a form
obtainable from The Planning Inspectorate at Temple Quay House, 2 The Square, Temple Quay,
Bristol, BS1 6PN or by contacting them on 0303 444 5000. Further information can also be obtained
from the Planning Inspectorate's web-site, and it is possible to download copies of appeal forms and
questionnaires and booklets giving guidance about the appeal process. The address is
www.planningportal.gov.uk/pcs.
You are allowed six months from the date of this notice of decision in which to lodge an appeal.
Application No: 13/05098/F

Negotiations
Before making an appeal, you may wish to contact the case officer who dealt with your application,
who may be able to advise you, how the council’s objections to your proposal might be overcome if
you amend your scheme. Please note that if negotiations are successful, you will need to submit a
new planning application, which may, of course, be refused by committee.
Lodging an appeal will not prejudice your negotiations but you may need to agree with the council to
postpone the appeal, to allow negotiations to take place.